The "Crapification" Of The US Economy Is Now Complete

The only thing left is the tiresome waiting for the implosion of the entire travesty of a mockery of a sham.

The U.S. economy has fundamentally changed, and not for the better. There are numerous dynamics behind this decay, and I'll discuss a few of the more consequential ones this month.

One consequential dynamic few mainstream pundits dare discuss is the "crapification" of the entire U.S. economy. That isn't my description, "crapification" is now in common use. If the word offends you, substitute terminal decay of quality, competition, utility, durability, repairability and customer service.

One aspect nobody seems to notice is the transformation from a society that once drew its identity from producing quality goods and services to a society that draws its identity from consuming crapified goods and services. Now that Americans define themselves by consuming, they are enslaved to consumption: to limit consumption is to disappear--and 'spending time" on social media is a form of consumption, even if no goods or services are purchased directly, as one's attention / time are valuable commodities.

In other words, Americans have been trained like Pavlov's dogs to consume, no matter how poor the quality and service. We just buy it anyway, and grumble over the decaying quality and service--but we won't take the only action that would impact corporations and the government: stop buying the products and services. Opt out, drop out, make it at home, cancel the service, just stop buying abysmally made junk and pathetically poor services.

Corporations and the government are monopolies or quasi-monopolies, and so they don't have to care whether customers are appalled by poor quality and service: they know the customer has to consume whatever is offered, no matter how crapified.

Go ahead and issue worthless warranties, products designed to fail, products designed to be unrepairable, software that is routinely declared obsolete so we have to buy the new crapified version that demands insane amounts of memory and processing power--go ahead, because the herd will continue buying the same garbage products and services because to stop consuming is unthinkable: I consume, therefore I am.

Governments know we have no choice and since we continue electing the same "best democracy money can buy" politicos, nothing will change. Those in power know the grumbling is just background noise because the herd will dutifully vote for the same crapified, corrupt, dysfunctional system every two years.

Consider the IRS, the agency with a monopoly on collecting taxes. I am sympathetic to the employees of the IRS, those tasked with the thankless task of collecting taxes, a task made more arduous by underfunding and understaffing. It seems the super-wealthy decided that if the IRS was starved of funding, the odds of their tax evasion being caught by an audit would plummet, and so voila, the IRS has been starved by the Demopublicans - Republicrats for decades, as Demopublicans - Republicrats all answer to the same small pool of super-wealthy donors and corporate sponsors.

Meanwhile, the average powerless taxpayer suffers the terminal decay of service and accountability. I am sorry to report that my Kafkaesque experiences with the IRS are also shared by many others. Our tax payments are immediately deposited (surprise!) but our tax returns that were delivered with the payment are declared non-existent-- the agency reports no record of the return being received.

This has happened to me year after year. And of course the crapification of the nation's core record-keeping-- taxation--then bleeds into other agencies and crapifies their records. So the Social Security Administration reports my 2020 income as zero, meaning I get no credit for the immense sum I paid in Social Security taxes (being self-employed, I pay 15.3% of all earnings in Social Security taxes--both the employee and employer shares).

Since the IRS claimed it had no record of my 2020 tax return, I wrote the IRS a letter asking if they wanted me to resubmit the return. Some months later I received a reply to my previous address--despite the fact I'd submitted an official IRS Change of Address form--saying "we're working on it." Uh, sure. Fine.

After repeated tries, I finally figured out that the only tax year in my file the IRS system recognizes in 2016. If I want to pay my quarterly estimated taxes online, I have to enter the data from 2016. Any other tax year data will draw a blank. In effect, I only exist in the year 2016, six years ago.

My estimated tax payments are duly deposited, and my payment attached to my return is duly deposited, but my tax return doesn't exist. Others have reported the same circumstance. News items report the IRS has a backlog of 10 million unprocessed returns, and you'd think our elected officials might show some modest interest in the crapification of the nation's tax and Social Security agencies, but no--they have zero interest in the crapification of the nation's core record-keeping as long as their super-wealthy donors and corporations can continue evading taxes via armies of tax attorneys and special giveaways slipped into several-inches-thick congressional bills.

Since Corporate America is now nothing but a collection of rapacious cartels and quasi-monopolies, they don't care about the terminal decay of their quality or service, either. They know we're going to show up and buy their garbage anyway because we have no choice, and they know the quality of their "competitors" (hahaha) products and service is equally noxious.

They can count on well-trained Americans continuing to fly, eat out, sign up, and buy, buy, buy no matter how wretched the quality and service because consumption is all we have.

In the Technicolor fantasy of corporate promoters, enterprises gain sales by making higher quality products than competitors. Two generations ago, this was still a cultural / economic dynamic.

But then everyone with a line of credit bought everything, and so now everyone owns everything. This saturation of all demand means sales can only decline, since durable goods last a long time. The only way to juice sales higher is by making insecure consumers crave the latest fashion, but this artifice has limits.

The solution was to crapify all products and services via planned obsolescence and endless loops of lousy, over-priced service. Products are now designed to be impossible to repair (eliminating cheapskate do-it-yourselfers) and by using the lowest-quality, lowest-cost components, manufacturers guarantee that the entire product will fail once the lowest-quality component fails.

And since many components are now digitized, the cheapest electronic component failing will cause the electronics to fail--a $1 chip fails and the entire $600 product fails--and so the entire product is then destined for the landfill-- what correspondent Bart D. termed The Landfill Economy, a term I now use to describe the entire global economy of planned obsolescence.

Discerning consumers have long noted the crapification of ingredients and the accompanying decline of value via shrinkflation. Discerning DIYers have noted how products are sealed, warranties voided, and simple maintenance jobs like changing the oil in a vehicle are now complicated by various perverse means.

As for service--Corporate America doesn't have to care about poor quality because they know we have no choice. All the members of the cartel offer the same rapacious pricing and pathetically poor service, so no corporation or institution (hospital, university, local government agency, etc.) has to fear a competitor might disrupt the cozy profiteering--there is no real competition in healthcare, higher education, defense contractors, telecom providers, pharmaceuticals, fast food, agribusiness, etc.--none.

I discuss the end-game of these dynamics in my new book, Global Crisis, National Renewal: A (Revolutionary) Grand Strategy for the United States.

The crapification of the U.S. economy is now complete. The only thing left is the tiresome waiting for the implosion of the entire travesty of a mockery of a sham.

My new book is now available at a 20% discount this month: Global Crisis, National Renewal: A (Revolutionary) Grand Strategy for the United States (Kindle $8.95, print $20). If you found value in this content, please join me in seeking solutions by becoming a $1/month patron of my work via patreon.com.

Are politicians now faking they have covid19 even though they are 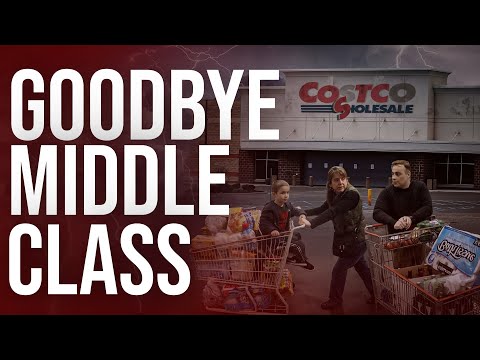 US has a zombie economy where the Fed